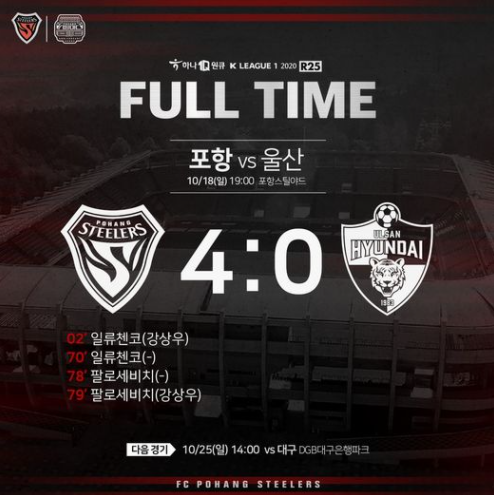 Tiger Fight, October 19, last weekend, the penultimate round of the K1 League this season was in full swing.

The turning point of the game occurred between 57 minutes and 62 minutes in the second half. In just 5 minutes, two Ulsan Hyundai foreign players were sent off with red cards.

In the 57th minute, Burtuiz was sent off for a tackle foul behind him, but the slow-motion playback showed that Ilyuchenko was suspected of being offside.

Johnson fell to the ground in the 62nd minute and was sent off for a retaliatory kick.

Ulsan Hyundai, who was less than two people, had no resistance and was easily defeated by the Pohang Iron Man. What's more deadly is that in the next round against Jeonbuk Hyundai's Cheonwang Mountain battle, these two foreign players will be suspended and unable to play.

In other games, Sangju Sangmu defeated Daegu FC at home, and as long as they tie in the next round, they can lock in the top four in the league and create the best record in team history.

In the relegation competition, the penultimate Incheon United and the penultimate Seongnam FC have lost. The two teams are currently only one point behind in their points. The Busan IPark relied on the draw with Suwon Samsung to basically ensure that it landed early.